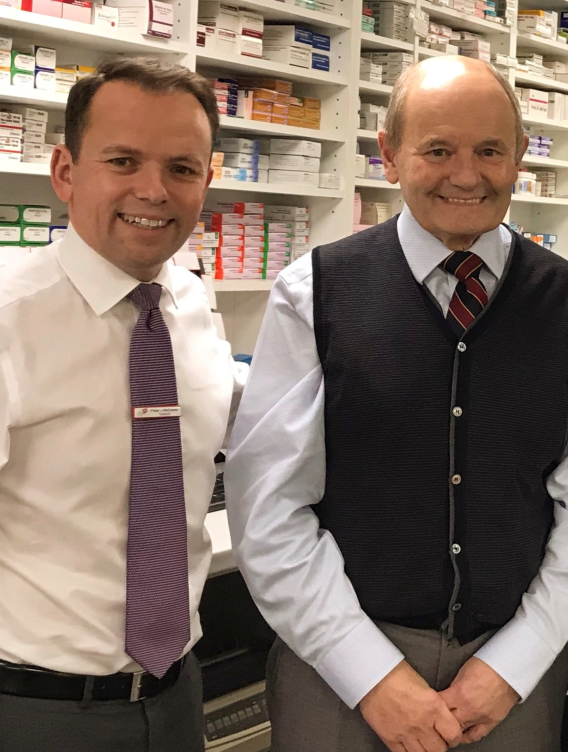 The McElwee family has been involved in pharmacy for three generations since the 1930s, continuing to foster a well-earned reputation as “the friendly face” of pharmacy, with excellent customer service and a commitment to healthcare and well-being.

Peter's grandparents were pharmacists on both sides, with pharmacies "R.M. Daly Chemist" in Tyrrellspass Co. Westmeath, and "McElwee Pharmacy" in Dungloe Co. Donegal.

James ('Jim' to many) and Mary established their business on the western side of O’Connell Square in what had been Walsh's Chemist in 1975.  With an excellent reputation as a veterinary pharmacist, Jim soon realised he needed a larger premises.

The pharmacy moved to what had been the famous Pim's Department Store on O'Connell Square in 1980.  With a veterinary shop, prams and pushchairs department, childrens clothes shop ('Alphabet'), as well as a toy shop this store had been a treasure to all.  As time progressed however it was seen as too large and so an opportunity to sell to Clelands Supermarket was considered ideal.

Those familiar with the current McElwee totalhealth Pharmacy on O'Connell Square will know it had previously been Murphy's and this was the final relocation to the eastern corner of the Square in 1990.  With extensive remodelling there were two floors of retail, including healthcare and veterinary departments, a jewellery and giftstore.  It represented the benchmark of retail excellence for community pharmacy in Ireland.

Peter returned to manage the business in 2001 and bought it 2004.  With Jim and Mary continuing to play an active role in commercial and professional aspects of the business, things went from strength to strength.  A plan to open a second business was an opportunity and new direction for McElwee Pharmacies.

And so in 2006, Peter opened McElwee Pharmacy Portlaoise.  This store has been a great success - pioneering a new model for surgery and pharmacy on the same site. In the capable hands of supervising and managing pharmacist Paula Murphy as well as many familiar McElwee staff, it has been rubber-stamped with the seal excellence, done the McElwee way!

In 2008 Peter bought Butler's "Mountmellick Pharmacy", which had been just a few doors down from the O'Connell Square shop.  Peter saw fit to move this store beside Super Valu Mountmellick at Davitt Shopping Centre and Glenard Clinic surgery, as well the HSE Primary Care Unit.  Thus the ideal location for convenience for his customer base.  This modern and airy store was initially run by Peter himself and is now managed by pharmacist Dermot Donaghy who has been with McElwees for many years.  Dermot is well known for his excellent care and attention to all patients and customers alike.

The original store on O'Connell Square had a full rebuild and refit in 2018 to bring it bang up to date to all modern day pharmacy standards. With Peter, as well as Liam Dunne new managing pharmacist, it continues to provide the service and reputation of a true modern healthcare environment as well as remaining loyal to the centre of the town. Well known for specialist pharmacist consultations in a modern but traditional store, it remains the busiest McElwee dispensary.  Jim and Mary also continue to pop in and out and so help to nurture a true sense of "family" to what has always been a true family business.

No matter what time of the day or year you will be greeted with a smile and a great professional service – is it any wonder their motto is “Big enough to stock it, small enough to care!"